Robert Spencer recently wrote in Front Page Magazine that Europe is being targeted for Hijrah.  Is that a new term for you?  Here is his definition:

“To emigrate in the cause of Allah — that is, to move to a new land in order to bring Islam there…   [it] is considered in Islam to be a highly meritorious act.”

He explains that the term refers to the time when Mohammed and his army left Mecca to return to Medina (where he was initially rejected) to forcibly bring it under his control.  Spencer then goes on to write,

And now a hijrah of a much greater magnitude is upon us.

Is this great flood of refugees a strategic initiative to bring Europe under the control of Islam?  Should we be afraid?

Maybe we should look another side of the story.

My wife Marti, and I recently entertained a young woman from Germany who has engaged with refugees in her town over recent months, teaching them German and helping them adjust to a world completely different from theirs in the horn of Africa.  Her eyes lit up as she described their kindness and their loyalty and their intelligence.  The BBC also ran a wonderful article in recent days.  It describes the daughter of Albert Speer, Hitler’s architect, who has been a life-long peace activist and who opened her large home to some Syrian men.  Her description of their care for her and her home, their honesty and thoughtfulness was wonderfully encouraging.

A couple of years ago, we got to know a Syrian immigrant who was living in London but wanted to come live near our community and planned to start a Middle Eastern restaurant in our town.  I didn’t discourage him, but I wondered if he knew how much work and money he would need to be successful.  Today, he and an Iraqi man have the highest rated restaurant in town.  And to top it off, they got the financial help they needed from a Sudanese man! 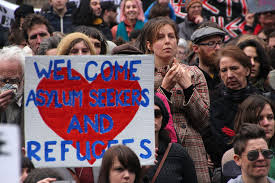 Do we welcome them or fear them?

Let me put it this way–if we fear them, time will prove that we had every reason to fear them.  If we welcome them (with due process) they will make a huge contribution to our continent.

If they experience fear and rejection; if they feel unwanted and unwelcome, bitterness will flavour their attitude to their new residence.  They will be more likely to become lawless.

If they are welcomed, given help to learn better English (or the language of another host nation) given jobs or trained for jobs where needed, helped to find homes and to navigate their way around this new world, then they are likely to love their new homeland.

As Christians we need to be wary of ideas and assertions that stir fear in our hearts.  For many years now, we have had a steady diet of commentators who convey fear of Islam, but let’s stop for a moment and re-frame current events. For more than two decades, millions of Christians have prayed for Muslims to meet Jesus.  It has been wonderful to keep hearing and reading about the thousands of Muslims who have come to know Jesus. What if, say 15 years ago, someone had prophesied, “in a few years’ time millions of Muslims will be fed up with their governments and the many competing factions of Islam and will be desperate to move to Christian lands where they can be freely reached with the Good News!”  Surely we would have eagerly looked forward to it.

Now it has happened. If Churches and individual believers everywhere in Europe (and other nations taking in refugees) met the new migrants with a warm welcome and thoughtful assistance, then this vast migration of people could turn out to be a huge blessing to the world.

Having said that, a word of caution needs to be added.  When I see groups of aggressive young men attempting to force their way past the rightful authority of our nations, I get a bit worried.  I am sure that the vast majority of refugees are exactly that–refugees. But I am also sure that there is a criminal element and Islamist agents.  The numbers may be small, but they could do extensive damage.  They need to be screened out, even though that is a difficult task.

So, let’s do all we an to extend a warm welcome to refugees/asylum seekers/migrants.  Let’s also pray for our governments, police and border control authorities that they may have the resources and wisdom to refuse entry to those who represent a danger to our nations.