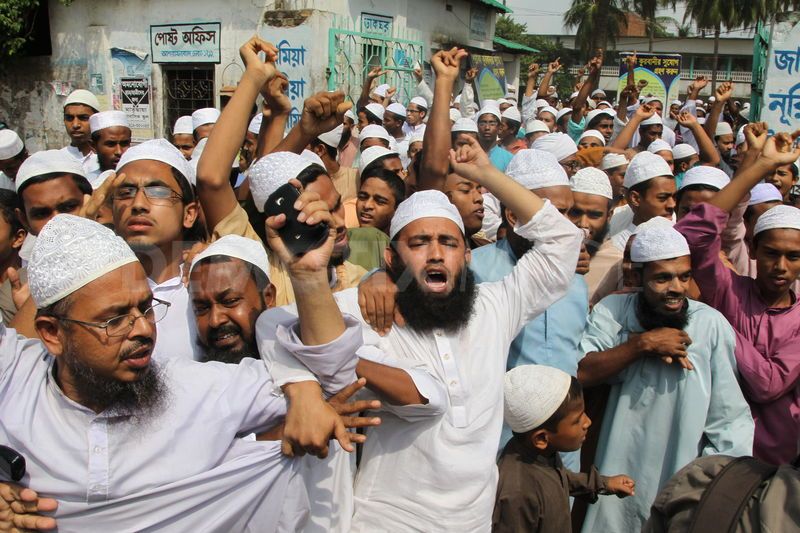 Okay, so I am writing on a subject that has been written on by journalists and academics all over the world.  Still, I think I have some helpful things to say.

Anyone who knows me knows that I have Muslim friends, have advocated on their behalf, have apologised to Muslims for the atrocities of the Crusades and the way Christianity has misrepresented Jesus, and have pointed out that the extremists do not represent the majority or even a statistically significant minority.  I do not believe that they are a true representation of Islam today.

However, the Muslim community does have a problem.  They are being represented by that very small minority; at least partly because our press trains the cameras on them and holds the microphones to their mouths.  But it is not all the fault of our press; Muslims have also failed to understand and implement their most important priority in this time of great danger.

Muslims turned out in their hundreds of thousands in many nations to demonstrate against the cartoons of Charlie Hebdo. At the same time, in the week or so that elapsed between the massacre at the offices of the satirical newspaper and its next edition, a number of horrific and highly offensive events occurred:  Muslim extremists executed, by stoning, women accused of adultery—and videoed it for the world to see.  They threw two men accused of being homosexuals from the top of a building, with a baying crowd watching below.  They cold-heartedly executed more prisoners of the war they initiated and, in at least one case, the executioner was a child.  The Saudi Arabian authorities continued with the weekly instalments of lashes of a cane to the back of a man who dared to criticise Islam and the Saudi Royal Family.  His sentence was prison and 1,000 lashes!

But there were no demonstrations against any of these acts of terror.

So what incensed them so much against the cartoons of Charlie Hebdo and the Danish cartoons published a few years ago?  They have a very strong aversion to any depiction of Mohammed.  It is very similar to the Jews and the Old Testament commandment that they should make no image of God.  This is very important to them.  It is a sin as heinous as making an idol was to the Jews.

I understand that as a Christian.  I was very offended quite a long time ago when play writes and film-makers seemed to be doing their best to offend Christians by depicting Jesus in various degrading ways.  At the time, we had blasphemy laws in the UK, but the “entertainers” seemed to know that they had powerful figures in the establishment on their side so they fought their indictments for blasphemy right up to the highest courts and had the result they had aimed for from the start—the blasphemy laws were struck down.

I wrote letters, I contacted my elected representative, I signed petitions, but we lost.  Part of me is now okay with that because it is very hard for the law to define what language is acceptable and what is not.  When the law begins to describe what we can say and what we can’t, we are liable to lose important freedoms and to give more power to the state than we should.  Of course, there are some words and subjects that “the powers that be” have decided are currently off limits.

For example, when I was a child we had a little saying when we were playing a game that needed someone to be “it”.  Eenie meanie, minie mo, catch a ni***r by the toe….  It was all very innocent and actually did not affect our attitudes towards African Americans in our school.  Notice that I can’t write that word now.  (I can write the F-word, which I could not write then, but I would rather not.)  Political correctness changes constantly because….well, that will have to be saved for another blog.

So, should there be laws against depicting Mohammed?  If so, surely we should reinstate the blasphemy laws that applied to the Christian faith. But, with the benefit of hindsight, I would rather we did not have blasphemy laws, so I don’t want a law against depicting Mohammed.  In the effort to stop offensive speech, we can easily create laws that end up giving away precious freedoms.

There are, however, many things that we are wise to avoid, even though they are legal.  I do not approve of this current issue of Charlie Hebdo, with its drawing of Mohammed.  It exacerbates already strained relations between Muslims and most citizens of Western nations.  In a civilized society, those who have the privilege of a public voice should not use it to intentionally offend a large segment of society that already feels marginalised.

But, I said that Muslims have a problem.  Indeed, they do.  Though the majority deeply disapprove of the violence being done in the name of Islam, they have not managed to get their voice heard.  That is partly the fault of the press that we all read, listen to and watch.  But it seems to me that it is also a case of misplaced loyalty.  There is a deep sense of commitment that Muslims should stand with Muslims whenever there are accusations or attacks from outside the Ummah (the global Muslim community).

But Truth trumps loyalty, at least it should do.  When we are loyal to those whom we know to be wrong, we become promoters of wickedness.

My hope and prayer is that non-violent Muslims all over the world will face the fact that their failure to get their voice heard is not only too bad, but it is a great threat to them.  I deplore the idea that Western citizens should rise up against Muslims, but voices like mine can’t really accomplish very much.  We need to see hundreds of thousands of Muslims taking to the streets all over the world to demonstrate in condemnation of Islamic State, of Boko Haram, of Al Shabbab, Al Qaeda and all the other splinter groups whose violent depravity, expressed in the name of Allah is causing so much pain, loss and global anxiety.

When they do, our press must cover it and make it high profile news!

4 comments on “ARE MUSLIMS THEIR OWN WORST ENEMIES?”