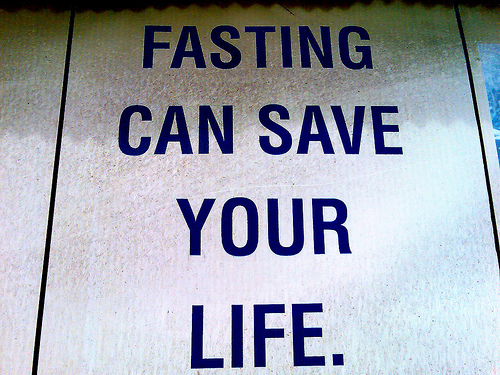 So, I am fasting for a few days.

I want to see some breakthroughs in my personal life and in some ministries I am responsible for, so I am fasting.  Coincidentally, my New Testament reading today was in Matthew 11 where Jesus refers to the reputation of John the Baptist contrasted that with what people were saying about him.  I like the way it is stated in The Message.  Jesus said,

What if Jesus had lived like John?  I think the world would be a different place.  If he had been an ascetic, like John, Christianity would be focussed on seeking God’s approval via self-denial and hardship.  Of course, there have been those Christians who pursued lives of great sacrifice and self-denial.  One of my favourite sites during the Reconciliation Walk was the ruins of the monastery of St Simeon the Stylite in Syria.  (I wonder if it has been destroyed by ISIS.)  He denied himself to an extreme; he lived on top of a fifty-foot-high pillar for 36 years and was reported to have stood on the top of the pillar, without eating or drinking or sitting down, for the entire duration of lent every year.  But if we all focussed on such extreme austerity and hardship, there would be few, if any followers of Jesus today.

Self –denial was not a significant part of my church background, but when I first joined YWAM, several of our teachers at the School of Evangelism recommended fasting as one of the means of grace towards spiritual growth.  One of those, Arthur Wallis, wrote a classic on fasting entitled, “God’s Chosen Fast”, taken from Isaiah 58.  I was inspired to begin to fast from time to time.  At one point, a friend and I decided to go on a fasting retreat for ten days.  In all of human history, no period of ten days has passed so slowly!  We would rise early, read our Bibles and have our personal prayer times, then get together for worship, then go for a prayer walk, then talk for a while then look at the clock—we had just managed to get to mid-morning!  Time crawled.

If you feel that the pace of life is too hectic and the days, weeks, months and years are whizzing by, try taking a fasting retreat.  You will feel you have all the time in the world!

They called Jesus a lush, a party man, a heavy drinker and eater.  Don’t you find that amazing?  John the Baptist lived in the desert and wore rough uncomfortable clothes and existed on locusts and honey.  (I could do the honey, but haven’t tried locusts yet and have no plans to.)   AND he was powerfully anointed.  So we might expect Jesus to adopt the same life-style, but he didn’t.  Time and again, we read in the gospels that Jesus was at a feast or a party.

That is not to say he was a stranger to fasting.  He prepared the way for his ministry by first being baptized and then the Holy Spirit led him into the wilderness where he fasted for 40 days and nights.  Then he first began to demonstrate who he was by attending a wedding reception and helping out the host by transforming drinking water into the finest wine.  So what can we conclude from these contrasts?  That God blesses a life lived in obedience and that He has unique purposes for each life and, when it comes to sacrifice and hardship, there is a wide spectrum of callings and grace.

So why fast, and what do we mean when we use the term?  When I first learned about fasting, I understood it to mean that I should stop eating any food, but I could drink water.  Later I learned that there are different kinds of fasts with varying degrees of sacrifice.  Some people fast sugar, or other treats.  Sometimes we speak of the “Daniel fast”, which means eating only vegetables and drinking water.

I think fasting has a few purposes and benefits. Firstly, it strengthens our own will and self-discipline.  To many modern people that seems a strange idea, but the ability to deny ourselves is a vital part of becoming all that we can be.  Fasting is also about sacrifice and it has often been said that “sacrifice precedes the Glory.”  If we want more of God in our lives, then sacrifice is one of the paths to more.  We also fast to promote the growth of our spiritual capacity and abilities.  The scriptures speak of “crucifying ourselves” so that Christ can live in us and that means, in part, supressing physical desires to increase spiritual desire.

I have a friend who fasts all food and water until 5 p.m. each day for five days a week. Before I met him,  I would have considered that to be too extreme, but this man’s life demonstrates that it is his calling and he has grace for it.  He has an intimacy with God that is amazing and I have no doubt that the fasting has been an essential part of developing that closeness with his Father in heaven.

But not many of us are called to that kind of life.  However, all of us should be acquainted with the benefits of sacrifice and fasting is an important way of choosing to embrace sacrifice.

In another place in the gospels, people were questioning Jesus and the life-style he and his disciples were leading.  They pointed out that John’s disciples fasted but his followers didn’t.  This was his reply,  “Do wedding guests mourn while celebrating with the groom? Of course not. But someday the groom will be taken away from them, and then they will fast.”

He has been taken—for the time being—so we fast.

2 comments on “THE PARTYING MESSIAH”